One of the most magnificent river systems on earth

Spectacular river journeys on the Tatshenshini River in Yukon & Alaska.

Join us for rafting expeditions on the Tatshenshini River – one of the most magnificent river systems on earth, flowing through one of the world’s most pristine wilderness areas.

Part of the world’s largest bio-preserve, the Tatshenshini flows through the Yukon, British Columbia, Alaska, Glacier Bay National Park, Alsek/Tatshenshini Provincial Park, out to the Gulf of Alaska.

The Tatshenshini and Alsek form a “Y” where the Tatshenshini flows into the Alsek River. The upper portion of each is dramatically different, so you want to keep both on your list.

The Tatshenshini River begins as a trickle in the alpine meadows of the Chilkat Summit, then swells to more than half a mile (about one kilometre) in breadth.

At its confluence with the Alsek River, the two rivers rival the largest drainages on the continent. Together they form a vital green corridor, between the interior and coast, through the highly glaciated and rugged peaks of the St. Elias Range and coastal mountains.

Below the spectacular peaks, the broad, lush valley is home to large populations of grizzlies, bald eagles, moose, wolves and other animals.

These qualities have earned the river a reputation as a coveted destination. Visitors are often torn between the choice of beginning their trip on the Tatshenshini or the Alsek. Those who have experienced both say you must keep each of them on your list.

Raft expeditions launch at the confluence of Klukshu Creek, location of the historic Southern Tuchone village of Shawashee.

Highlights of the Tashenshini include a section of Class III whitewater, spotting wildlife while meandering through lush meadows and thick foliage, the excitement of swift water through a glacially carved valley beneath the St. Elias Range and the vast glaciers at the confluence with the Alsek.

Originally, the Tatshenshini was known as the Allsegh River, but around 1891, it was designated as the Tatshenshini River by the Canadian government, and the lower Kaskawulsh River became the present-day upper Alsek River.

In the 1800s, the Tatshenshini River was an important trade route for the coastal Tlingit people. In 1890, Jack Dalton and Edward Glave were the first Europeans to travel the river, descending it in a dugout cottonwood canoe. In 1897, Dalton established a trading post close to the Tatshenshini where the river begins its westward flow. During the Klondike Gold Rush, the trading post was a thriving hub. Today, this is the launching site for our river expeditions.

The Tatshenshini River emerged from obscurity in the late 1980s when development plans for a small gold mine changed to a large-scale copper mine, requiring a road, bridges and massive tailings ponds in the heart of this largely untouched region. In the area surrounding the Tatshenshini River mountains are still growing, making this region more seismically unstable than the San Andreas Fault of California. The plan to have the acidic waters of the tailings perched above the Tatshenshini, a major salmon river, sparked international concern. The Tatshenshini-Alsek watershed was put at the top of the list of the 10 most endangered rivers in America. As a result, Tatshenshini Alsek National Park was formed and the region now comprises the heart of the largest biological preserve in the world and one without a mine or roads. The Tatshenshini River was designated a Canadian Heritage River in 2004. 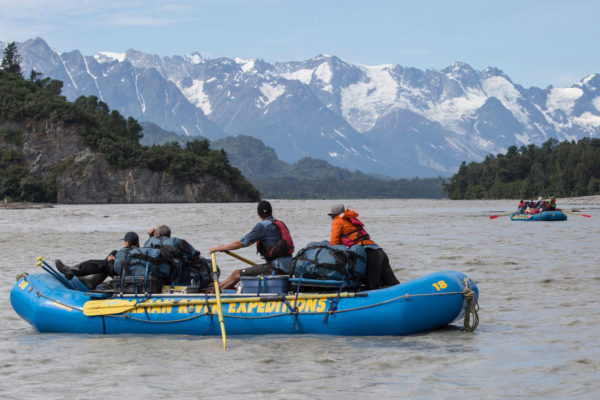 Part of the world's largest bio-preserve, the Tatshenshini flows through the Yukon, B.C., Alaska, Glacier Bay National Park, Alsek/Tatshenshini Provincial Park, out to the Gulf of Alaska. 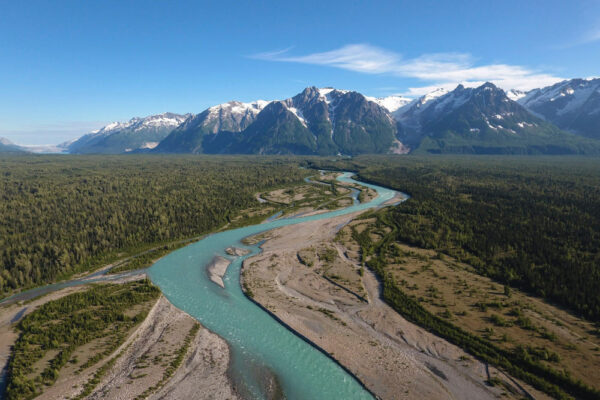 Ranging from the rolling, forested hills of the Yukon interior to the towering coastal ranges of the Alaskan panhandle and blanketed with one of the most impressive icefields on the planet, the Tatshenshini river journeys through a uniquely diverse landscape. Add in its proximity to the Gulf of Alaska you are right to wonder when the best time to visit is! 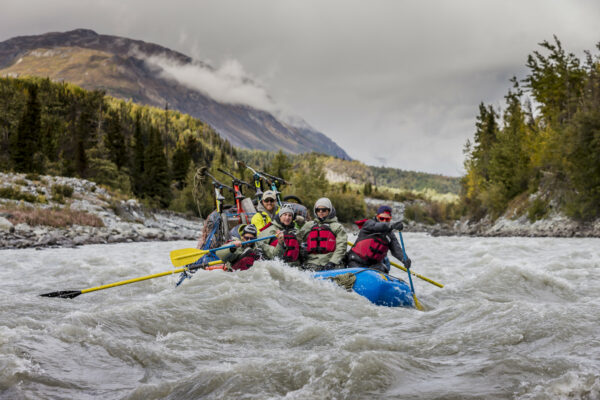 Rafting and Riding the Tatshenshini

In the summer of 2016 we provided support for the filming of a Red Bull film documenting a thrilling Tatshenshini whitewater journey and extreme free-ride mountain biking expedition. 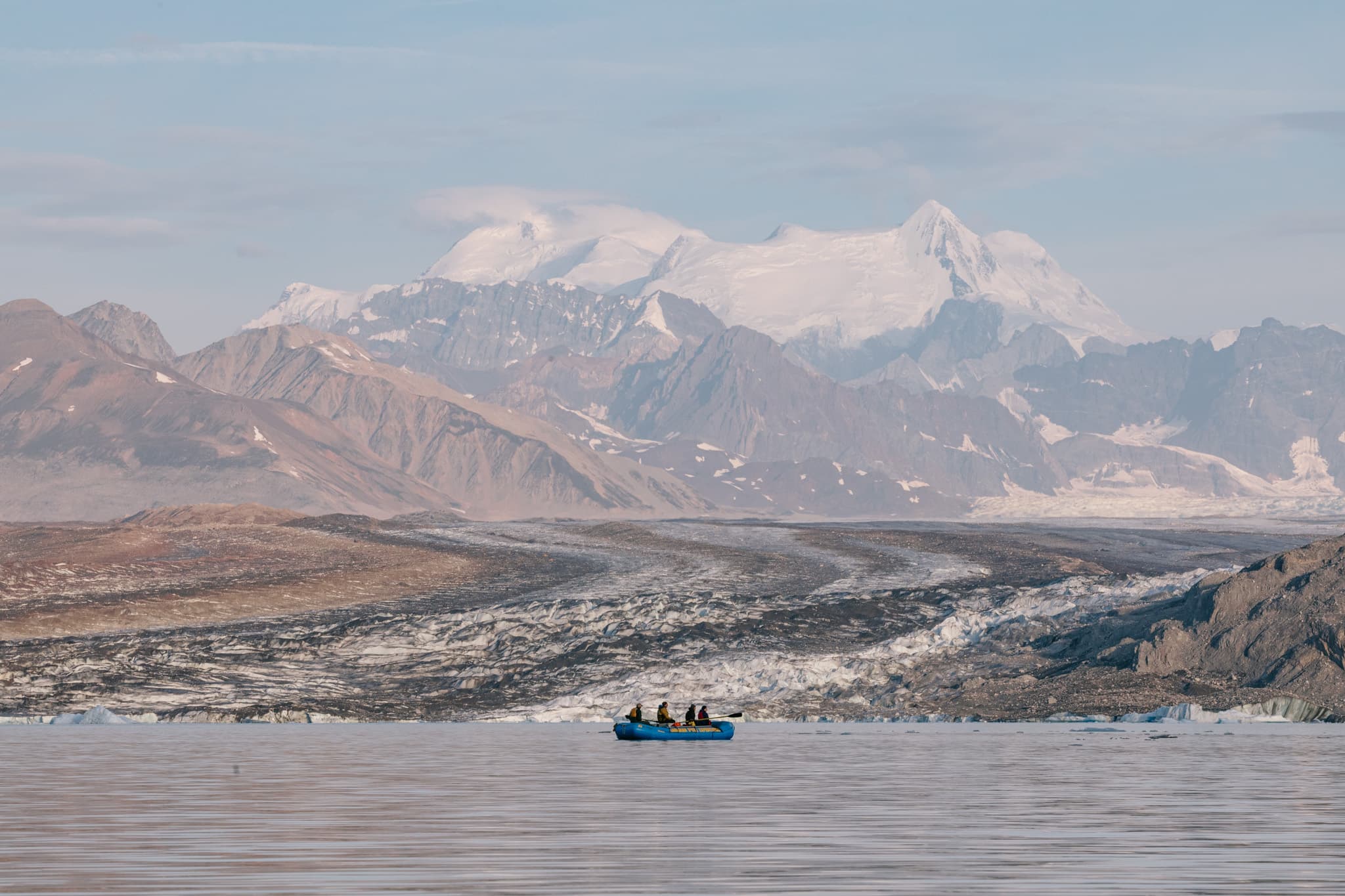 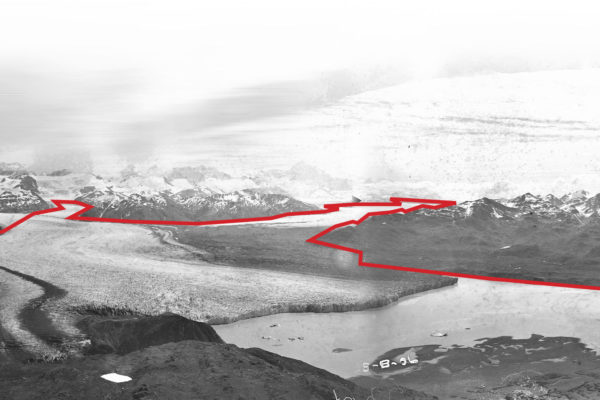 What began as a search for old aerial photographs of the Alsek River and glaciers in northern Canada and Alaska, led to the discovery of an international treasure documenting the world’s largest non-polar ice cap. 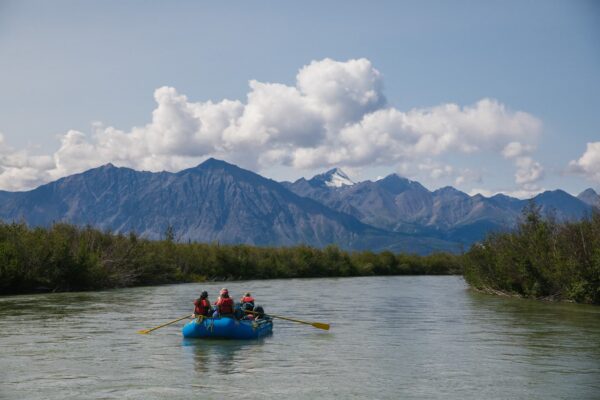 Renowned for large rapids, Himalaya-like mountain valleys and glaciers, the Alsek is a wilderness treasure unlike any other – including the Tatshenshini.